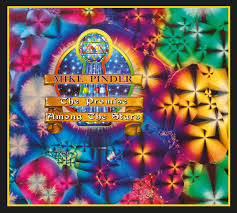 English musician Mike Pinder was one of the founding members of the British rock band The Moody Blues. In the early years of the band, Pinder and leader guitarist/singer Denny Laine became the primary song writers for the band before Laine left the band in the late sixties. Mike Pinder recorded his debut solo album “The Promise” in 1976 during a break from The Moody Blues, which led to his exit from the band in 1978.

After the mild success of “The Promise,” Pinder moved away from music to work for the Atari computer corporation until the mid-nineties. He would return to music to release his second solo album “Among the Stars” almost twenty years after his first album. Since then, he has become one of the most sought after studio musicians and has received praise for his spoken word album for children.

Now, Mike Pinder is once again receiving recognition with the newly released box set entitled “The Promise/Among The Stars.” It was released near the end of last year in Europe and is now available in the U.S. through Esoteric Recordings. The set includes a remastered version of Mike Pinder’s debut solo album “The Promise.” The sound is amazing as you would never know the album was almost 40 years old. Songs like “You’ll Make It Through” and “Someone To Believe In” show Pinder’s talents in front of the mic. The six-minute album closer “The Promise” showcases his keen sense to write great songs.

Also included in the set is Mike Pinder’s second solo album “Among The Stars,” which was only previously available as mail order only release. Now the album is presented here with three new bonus tracks by Mike and The Pinder Brothers. The three bonus tracks were produced by the late Tony Clarke (Moody Blues). While twenty years may have passed between recordings, Mike Pinder still sings with a passion to prove his talents as in the ballad “You Can’t Take Love Away.” He incorporates a little jazz into his sound on “Hurry Home” and gets a little funky on the album closer “The World Today.” The three bonus tracks are some of the real treasures in this set. The mellow rock of “If She Came Back,” which sound like a lost opportunity at a hit single, and “Waves Crash” and “Empty Streets” are performed by The Pinder Brothers and feature Ray Thomas on the flute.

Finally included in this set is a DVD of an interview with Mike Pinder from June 2012. Mike talks about his time in the Moody Blues, as well as his solo career. Also included are solo performances, as well as a bonus interview from 2008. Rounding out the set is a 16-page full color booklet with information and lyrics from the two albums and a newly written message from Pinder himself. To find out more about this great set from Moody Blues keyboardist Mike Pinder, please visit www.cherryred.co.uk/shopexd.asp?id=4389