Two founding Moody Blues members, singer/keyboardist Mike Pinder and singer/flutist Ray Thomas, are reunited on a new song by The Pinder Brothers, a duo made up of Mike’s sons Matt and Michael Lee.  The elder Pinder and Thomas lend their talents to “Summer Moon,” the final track on the siblings’ recently released album Melancholy Sea.

The album, which is The Pinder Brothers’ third studio effort, can be ordered now at CDBaby.com.  You also can check out samples of the songs at the website and at PinderBros.com.

Interestingly, Pinder and Thomas also are featured on a new song titled “Simply Magic” from Moody Blues singer/bassist John Lodge‘s upcoming solo album, 10,000 Light Years Ago, which will be released on May 5.

Pinder and Thomas were part of original lineup of The Moody Blues, which formed in 1964.  Mike left the band in 1978, while Thomas retired from the group in 2002. 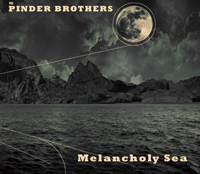